Mistress tests guy by trampling him

This mistress wanted to test this guy so she trampled his head with her boots. She also did it with her bare feet. She crushed him cruelly and he felt a lot of pain but since he knew he was being tested, he did his best to endure the pain she was inflicting on him. She was blown away by how well he tried to endure the pain and she rewarded him.

Mistress Ronja did not want to let this loser take advantage of her and her plans. She resorted to teaching him a lesson and she did it cruelly. She forced the loser to place his hands on the floor and she crushed them using her high heels. He was in a lot of pain but she did not care. She made him cry in pain but she ignored his cries.

Mistresses trick guys and trample them

This mistress loves sneakers and she loves trampling. She met with her friends and she convinced them to try trampling. They agreed and went online to get guys. The guys came running thinking that they were going to have fun with the girls. But it turned out that they were interested in having fun at his expense. So the mistresses trampled them and degraded them as cruelly as they wanted.

Mistresses gang up on guy and teach him a lesson

Mistress Gaia and her friends had a problem with this guy. He tried to act tough with them instead of agreeing to the mistake he had made and then correcting it. They were ready to solve things amicably but when he tried to project toughness and strength on them, they snapped and they trampled him painfully as punishment. He regretted what he had done but it was too late and he had to reap what he had sown.

Mistress Natasha wanted this guy to realize that she was not a pushover. She did that by trampling him and making him cry like a little baby. She used her shoes as well as her bare feet to do it and the loser cried when the pain became too much. He had never been subjected to such pain before and he begged her for mercy saying he would never do it again.

Madame Marissa wanted to dominate a guy badly but she did not have a slave. And no one had pissed her so she did not even have a reason to torture anyone. So she looked up this girl online and she paid her to endure her trampling. The girl was broke and she agreed to be trampled and dominated. She was tied and the mistress trampled her all over her body including her tits.

Mistress Lyla wanted to leave her boyfriend for cheating on her. But he begged her to stay and he did all he could to make her stay. But she had one thing she needed to do before she stayed. She had to get out her anger. And she took it out on him. She trampled him and she stomped on him naked body as painfully as she was able to.

These lesbians met this bigoted guy. He talked badly about lesbianism and gay people in general. The mistresses did not mind it but when he got personal with them, they could not take it anymore and they had to punish him. The mistresses threw him on the floor and they trampled him. They did so with their shoes and they crushed his entire body as punishment for what he had done. 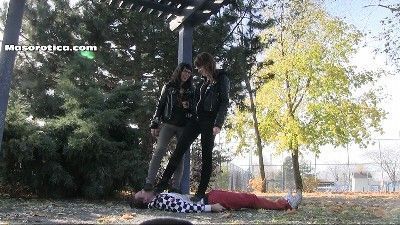 When this mistress caught her slave handling food with dirty hands, she was pissed. She called her roommate and the two of them punished him cruelly. They trampled him using their shoes and inflicted pain on him. He could not do anything about it and had to plead for forgiveness from the angry mistresses who threatened to beat the shit out of him again if he did not change. He did.