Mistresses Joss and Sonny had a problem with this guy for lying to them about their investment. They ended up losing money and were pissed. They had to make sure that they taught him a lesson and that he gave back their money. They crushed him using their bare feet. They crushed his stomach, his balls as well as their face and head. They made sure he was in a lot of pain and he agreed to their demands.

Mistress Amethyst is a mistress for hire. She gets hired to punish and torture people from slaves to losers and even boyfriends and husbands. Today she was hired to punish a thief and she did it spectacularly using her high heels. She used her high heels to trample him. Her heels ate into the flesh of his skin and he cried and begged her to stop saying he had learned his lesson.

This mistress knows the value of hard work. But her slave does not. She had to make sure he changed from a lazy man into a hard working one and she was determined to do it. Every day she came from work she would crush him and stomp on his body using her boots and high heels whenever she learned that he did not do anything meaningful that day. She did it severally till he learned to work hard.

Miss Elise learned about trampling and was dying to try it. She looked for a loser and pretended that he had done something to her. She then used it as an excuse to drag him to her house where she trampled him. She crushed his balls and even jumped on them. She turned him over and crushed his ass as well as his back. It was a lot of fun and she did not notice time fly.

Lady Nicole did not like how sloppy her boyfriend had been during sex of late. She had to do something of it. She surprised him while they were sleeping and she trampled him using her bare feet. She crushed his stomach, his head, his groin as well as his chest before she told him why she was doing it and warned him against ever slacking on that department again. He promised not to.

Mistress Lisa did not like the loud sexual voices that came from her neighbor. She tried to warn him but he thought she was being jealous. She did not care about his sexual escapades. She just wanted him to keep it to himself. When he did not, she stormed into his house the following day and crushed him using her bare feet. She crushed his head and even his chest.

When this guy tried to befriend ladies Electra and Natalie, he did not know what he was getting himself into. He thought he was having fun, but it turned out he would later regret that decision. The mistresses played along until he went over to their house. They trampled him and crushed him using their bare feet. They jumped on him and slapped him using their feet before they let him go,

Mistress Faye likes to look for any excuse to humiliate and especially trample her slave. Sometimes she has a legitimate reason and sometimes she does not. Today she found her slave relaxing after he had done his work and she wrongly accused him to lazying around without finishing his work. She trampled him using her high heels and when she insisted he had done his work, she gave a fake apology since she knew what she was doing.

These lesbians caught this guy stealing. He thought that just because they were lesbians, they would not do anything to him. The mistresses caught him and they punished him. They trampled him together at the same time and inflicted a lot of pain with their combined full weights. Besides that, they reported him to the authorities where he was punished further and learned a lesson he will never forget in his life. 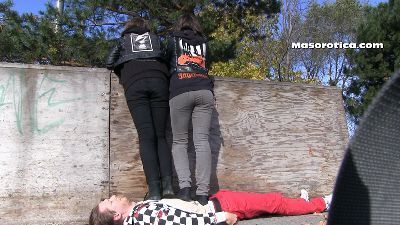 Madame Marissa likes to punish her slave periodically so that he does not take things for granted. Today was one such day. She called him to where she was and she used her sandals to trample him and crush his face. She made sure he was in a lot of pain and was begging for mercy before she forgave him. He learned the lesson the mistress wanted him to learn.